Due to fact that the school year has come to an end and learners went on holiday, I decided that a treat for outstanding learners would be a good gesture. So, Lukas and I took three learners on a outing to town: Thandoxolo, Zinthle and Anesipho. I chose Thando due the fact that he was so dedicated to the awarenet programme and attended almost all the sessions throughout the year. Now, he has passed grade 9 and will leave his CM Vellem HPS and the awarenet programme. He is further incredibly successful at his sports Karate, which I also support in my private time, so I think it was a great opportunity to spoil him. 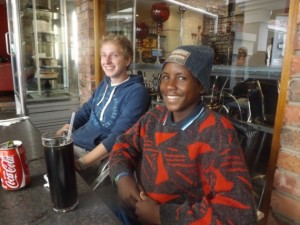 The two sisters Zinthle and Anesipho I’ve sort of taken in my care due to the fact that they both don’t have parents and stay with their Granny. The two little girls are very close to my heart. All three of them come from a very poor background and haven’t been to the center of town very often in their young lives. 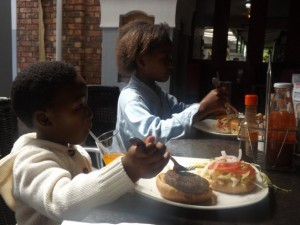 We picked them up at 9am and took them to Revalations – a restaurant in town – where they each had a huge burger, chips and a cool drink – probably not the healthiest to eat but as the saying goes: “Christmas is only once a year.” The meal was partly sponsored by Revalations and partly by myself and Lukas. After this great brunch we went to the Albany Museum where we had a look at the wide range of fossils, skeletons and stuffed animals. They all had so much fun and were amazed at all the different things to be seen and learned about our planet. 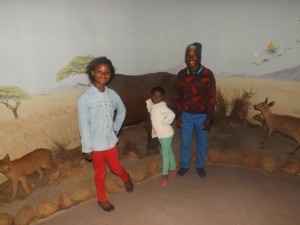 Then we decided to have a postprandial walk and visited Grahamstown’s beautiful Botanical Garden. We joked around and enjoyed the good weather. After three hours of activity we dropped them back home. We really savoured the trip and we hope to be able to repeat a trip like this. Such a small effort for three happy children!