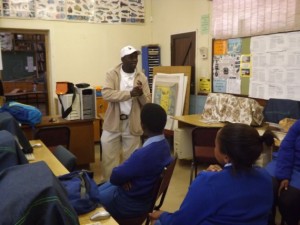 This is Rooi Rkhotso, a top runner from Grahamstown motivating the learners in sport.

In the second term of school, we started a health and fitness project, during which we teach the learners how to keep fit and healthy  by playing sport. The schools participating in the project are Ntaba Maria PS, Good Shepard PS, C.M Vellem HPS, Seventh Day Adventist School, Archie Mbolekwa SS and Khuhliso Daniel SS.

During the first week, we discussed team sports and eating habits in the awarenet forum. Some examples:

Sompani from Ntaba Maria PS  said: “Netball it is my favourite sport, because it helps me to keep my joints strong and well working. We do our netball sessions with our netball coach at school and we train four times a week.”

Fatyi Sisipho from Archie Mbolekwa SS answered: “I do few of some fitness training just like boxing, because you need to have strength when u are ruby player. Rugby is my favourite sport. I train twice a week.” 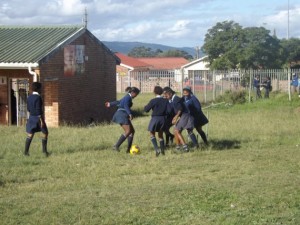 We also put the theory in action and played some soccer and netball, which are the two sporting codes that the learners really enjoy participating in. We trained to build up some fitness for the awarenet Health and Fitness Day on Youth Day. Two soccer balls were donated by Albany Sports from Grahamstown. The sporting activities happened on the school grounds. Photos were taken during the playing of the different sporting Codes.

Finally, motivational talks were also given about keeping motivated in sport and how to become the best you want to become in sport. Ntaba Maria PS learners had the opportunity to listen to Rooi Rikhotso talking about how to keep motivated in sport while still focusing on academics, not to get involved in wrong doings and wrong friends. Rooi is a top runner from Grahamstown (originally from Limpopo) and works as a security guard. The learners enjoyed Rooi’s talk and found him very inspirational.

Seventh Day Adventist School  and Good Shepard PS had the opportunity to listen to Thandoxolo Royi talking about his sport, Karate. Thandoxolo is a Grade 10 pupil at Nombulelo Secondary School and also an active awarenet student. He is very good in Karate, working towards his Black Belt in the next few years. The learners found him very inspiring as gave a very good insight to the world of Karate. They even had the opportunity to learn a few karate moves as he demonstrated them.

Chris Tobela motivated C.M Vellem HPS with his Soccer Coaching skills giving them advice how to achieve in Soccer. Chris works at Albany Sports and is a soccer coach for the ladies soccer team called African Connections. They thoroughly enjoyed hes talk. Blogs were written about all the motivational talks.

The new few weeks we will keep training and also learn about good nutrition until the awarenet Health and Fitness Day. During this day, we will have soccer tournament and the learners can compete for Mr. and Miss Fitness. Additionally, there will be a Karate demonstration by Thando and the Joza Karate Club. The project has been a great success so far and the learners are enjoying playing sport and learning about Health and Fitness. 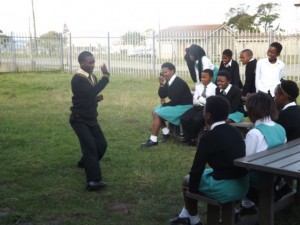 Thando giving a Karate Demonstration to the SD learners 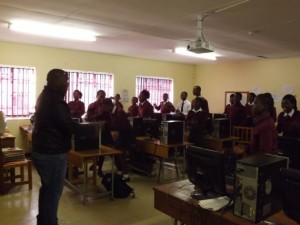 Chris Tobela, the soccer coach giving a motivational talk to the C.M Vellem about soccer.

We use cookies to ensure that we give you the best experience on our website. If you continue to use this site we will assume that you are happy with it.Ok