On Friday, the 15. of November 2014, the Joza Youth Hub in Joza-Grahamstown was officially opened after years of discussions and planning by a lot of very dedicated people in Grahamstown. First one to name is Diana Hornby of the Rhodes University’s Community Engagement Independent Institute, who also opened the event alongside Executive Mayor Peter and Dr. Mabizala, DVC of Rhodes University. Congratulations to everyone involved! 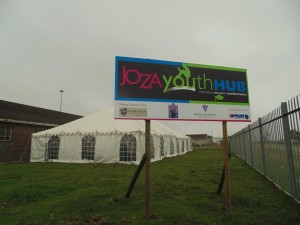 The Joza Youth Hub will be a hub for science, IT, journalism, culture and art, where a large group of local NGOs will offer their services to the underprivileged youth to give them an opportunity to learn and network and build their future.

NGOs that will move into the hub are the Center of Social Development, Makana Science Alliance and the Mobile Science Laboratory, IkamvaYouth and the VSA, Upstart Newspaper, the Access Music Project and Sakhulunthu Cultural Group, all under the patronage of Community Engagement. We all hope to to work together more effectively and be more present to the youth than in our current offices which are widespread and sometimes far from the learners. The hub will have communal rooms incl. a science and a computer lab, which can be used by all NGOs.

All NGOs were given the opportunity to present their work to the guests, so the VSA also had a stand to explain what can be done with awarenet and what we have achieved so far. 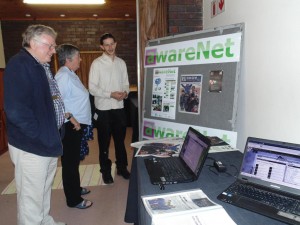 Speeches were given by Mr Mcuba, principal of Khutliso Daniels School, and Mr. de la Mare from ABSA (sponsor), but also the youth had their say. The awarenet learners from CM Vellem School performed their awarenet Peace Song, AMP! of the Access Music Project played their music, the Upstart Youth Choir sang and IkamvaYouth recited poetry.

The speeches expressed great hope. Big topics were partnerships between several NGOs and the schools. It was said that one has to believe in the common goal together with the partner. If one does’t believe in what one does, then it’s better not to start a project. One has to be positive about one’s mission and one has to be aware that it’s always hard work!  Several organizations shall work together and share their resources to reduce their costs and increase their impact. The speakers were also hoping for a good cooperation in future and that all organizations take their chances to enter new partnerships. Organisations shall share their ideas and their purposes which could rise to new innovative partnerships and lead to better results for all in the end.