by Antje Hering and Rieke Heitmueller

On the 26th of January, the Ironman 70.3 took place in East London/Buffalo City in the Eastern Cape. More than 3000 athletes came together to swim 1.9 km, to cycle 90 km and to run 21.1km. Terri-Lynn Penney, our supervisor and awarenet coordinator in Grahamstown, was one of them, and she was going to support our awarenet programme with her commitment. The idea was that we had to call attention to her and the initiative and to raise funds for the awarenet Peace Project. We were going to ask spectators to donate for every km Terri was going to swim, run and cycle. 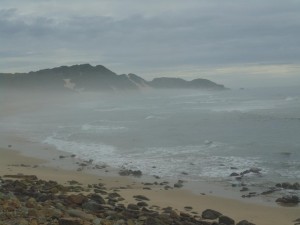 So, shortly after 6am, we left our backpackers walking to the start of the race while the town was in the fog and people were preparing their stands on the closed traffic roads. We met Terri and wished her good luck and great success, before we went on with our own mission. At a quarter to 7am, the top athletes started swimming in the sea. The water was shallow and the sea was calm – best conditions for a swim! 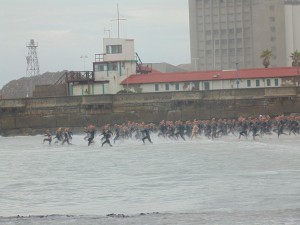 While Terri was racing, we informed visitors about the fundraising campaign and collected funds. We handed out flyers and talked to a lot of people. For a good start and motivation, we collected a donation of R100 from one couple. Most people donated 10 to 20 Rand, but every little bit helps! 😉 At the end of the day, we had collected R1600, while Terri had finished the triathlon after 6 hours 3 minutes and 58 seconds. Wow! Well done! 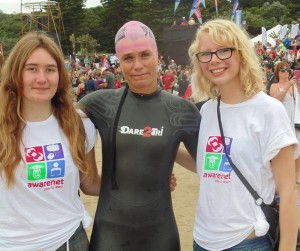 The last athlete crossed the finishing line after 8 hours racing at half past 3pm and we went back to the backpackers. It was the first race, we had ever visited and we were impressed by the amazing atmosphere. There was music playing all the time, people were cheering on the athletes and visitors could relax by the pool, too.

If you also want to support our work and donate towards the awarenet programme, make your contribution to Terri’s campaign on betterplace, now! Thank you.