awarenet learners and VSA staff along with many, many others in Grahamstown braved the weather and joined to form a Human Chain connecting poor&rich, educated&underprivileged in the memory of Nelson Mandela and his dream of democracy and freedom. Citizens came out in large numbers to make the first Human Chain event in Grahamstown on Friday 21st of February 2014 a success. Expectations were exceeded and people were not only committed, but also had great fun and made new and motivating new experiences. 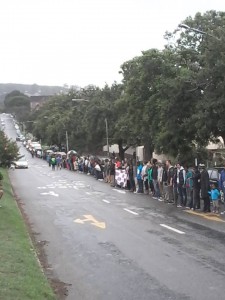 “Before the event started, Terri and I met our 30 CM Vellem School Grade 9 awarenet learners in front of their school and painted green hearts on their cheeks as a continuation of the “Spread the Love” Campaign. 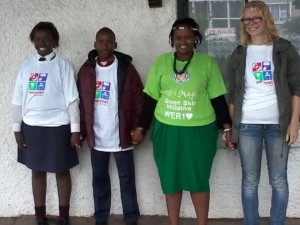 Here, we stand together with the two learners, Thawaxolo Royi and Thawodwethu Mcoboki and the awarenet volunteer, Nosie Mahlaba Ngqwala. My personal highlight was to see all the people standing together and holding hands to thank Mandela no matter how old or from which country. Despite of the rain and the bad weather conditions, Grahamstown residents were in a good mood, sang the national anthem and some other songs and started to dance. It was a great event and I’m glad, that I joined the Human Chain!” 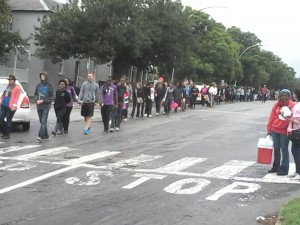 Based on the reports from the Co-ordinators of each area, Grahamstown managed to cover most of the route, only having some gaps in the Albany road and M Street area. Based on Rhodes University’s calculations, an estimated 4 000 people joined hands to form the chain.

Articles can be found in the Daily Dispatch and Grocott’s Mail.