Rhodes University’s Community Engagement Week ran from the 5th to the 9th of May in Grahamstown. A colourful programme consisting of education activities, youth dialogues, development workshops and panel discussions was provided to the visitors.

All departments and student organizations involved in Community Engagement initiatives as well as community partners set up exhibition displays in Eden Grove.

The Department of Music and Musicology and us presented the ‘awarenet Peace Project’, one of the biggest projects of the awarenet programme, which was supported by the Department that sponsored the recording of 5 peace songs.

More than 50 awarenet learners from 5 schools participated in the awarenet Peace Project and created their own songs for international Peace Day. Corinne Cooper, Lunga Heleni and Zukani Budaza trained the learners aged between 12 and 15 in song writing and song composition for 7 weeks. They presented one song per school at the Peace Day concert in front of 400 visitors in September 2013. Finally learners from Ntaba Maria School won the first prize for the best song and received their own music video shot. Furthermore, all the songs in the competition were recorded by Corinne Cooper who will also produce the CDs at the Rhodes recording studio. 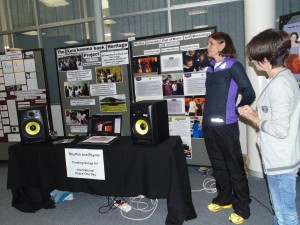 After CE Week had been officially opened on Monday, every Department and organization presented their projects on the following day. Terri-Lynn Penney (Village Scribe Association) and Corinne Cooper (Rhodes University Dept of Music and Musicology) introduced the awarenet project to the audience (60 people including the Vice Chancellor). Visitors were able to listen to all the songs while watching the music video and several slideshows which showed the whole process of the project. They were quite impressed, and we hope that we will receive support again from RU for the next awarenet Peace Project this year. Around 8 students have already offered their voluntary help, which is fantastic news for us!