Year after year, we start our awarenet peace and music project. This year, groups from CM Vellem Higher Primary, Good Shepherd Primary, Ntaba Maria Secondary, and Khutliso Daniel Secondary School arealready preparing their peace songs for the upcoming concert in September 2014. The learners aged between 12 and 15 write the lyrics and melodies of their songs themselves. Corinne Cooper of the Rhodes Department of Music and Musicology composed one backing which was given to all 4 schools and the Upstart Programme. Together with Zukani Budaza and Lunga Heleni, she trains the learners in song writing and song composition for ten weeks. The HipHop verses of the songs are almost completed and the choruses are taking form. They will be sung in isiXhosa and English. 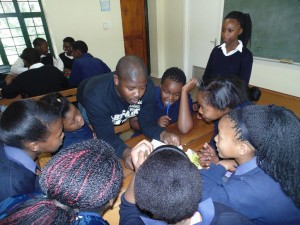 Related to the International Peace One Day Campaign, the awarenet Peace Day Celebration will take place for the third time in Grahamstown on the 26th of September at 14h30 at Noluthando Hall in Joza. Feel free to join us – the entrance is free! The learners will present one song per school and compete to perform the best awarenet peace song. They will be judged by a three-headed jury in five categories. The winning school of the best peace song will receive their own professional produced music video. All songs of the competition will be recorded by Corinne Cooper and the Rhodes Department of Music and Musicology who will also produce the CDs at the recording studio. Each participant will get a CD at our launch party. Do not miss this exciting event! All news and updates will be found in this blog.