On the 5th of November the C.M. Vellem Grade 9s celebrated their farewell at the Makana resort in Grahamstown. Because VSA worked with the learners for the last three years we were invited to participate in the ceremony. The learners were smartly dressed in their uniforms and even the teachers looked good in smart wear. All the learners were waiting outside nervously anticipating the grand entry walk into the hall. Two by two they walked into the hall where they introduced themselves in choir singing ,they entertained all with abit of choir singing before they took their seats. The MC lady introduced the program of proceedings where after the event was opened in prayer,all talking was done in Isixhosa. 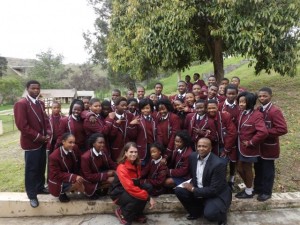 Member of the committee, Mrs. Vamva, the deputy principle, Mr. Mampunye, the class teacher Mr. Planga as well as the guest speaker, Mrs. Bottomon held speeches about the future of the children and the importance of education.

After a very motivational speech the learners once again entertained us with their Choir singing. Terri also had the honour of giving a speech about the Grade 9 to their dedication and work on awarenet. 18 learners received certificates in dedication and attendance in sessions during the teaching of awarenet. 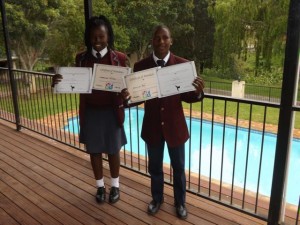 Two of the very active awarenet learners Thanduxolo and Thanduwethu also received Merit awards in sport for Karate in participation and dedication. After all the excitement in speeches and hand overs it was time to eat. The meal consisted of Chicken,meat pieces,yellow rice,roast potatoes squash with peas and pumpkin. After the meal Terri was thanked for all the work she did for the school and the learners. It was a very enjoyable event, we are looking forward to teaching awarenet at the C.M Vellem School in 2015.

We want to say goodbye to all the lovely learners from Grade 9 and thank you very much for your dedication during the last three years. Good luck for your further journey.