Time to reflect on my journey through 2014 with my volunteers, my learners, the good times, the bad times, positive challenges and negative challenges……Where do I start? Well, 2014 started off with a bang in the month of January 2014, when schools reopened to the first school term. I was filled with excitement to meet new teachers and learners. A new start, a new beginning to the year 2014! As always, the first few weeks were filled with a few hiccups, but as the weeks progressed things became easier and better. The first term of school I always find very busy getting to know the new learners, teachers and meeting up the principles and – yes, to see if computers labs were functional!  🙂 Lots of planning goes into the first term, but as it progresses and the learners get to know awarenet things ease off. So, this really was a positive challenge to begin with! 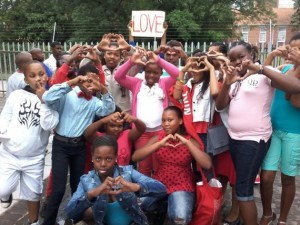 The second term was filled with great excitement being blessed beyond note to do a special day on the 14 February: the “Spread the Love”-Campaign, filled with hugs and hearts. 4 schools were involved in this one day project. The learners and us had to hand out as many hugs as possible and just spread the word ”Love”. Our volunteers Antje and Rieke together with myself started at Good Shepard PS, where all the learners were dressed in white and red. They all received red and green hearts painted on their cheeks, where after they had to hug as many learners and friends as they could to spread the love to often less fortunate learners. Other Schools that joined were Ntaba Maria PS, CM Vellem HPS and Victoria Girls High School.

Another event at the end of February, which really meant a lot to me was the formation of a human chain on the occasion of Mandela Day. The chain was 5 km long and reached from the township to the center of Grahamstown. The whole Grahamstown Community came together and held hands to demonstrate unity despite the bad weather conditions.  I loved every moment of this. 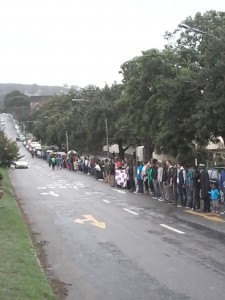 March is the months of the Science Festival, in which the VSA takes part for three years now. Every year, SciFest presents itself under a different theme. This year, it was ”Into the Space”. As usual, we attracted a lot of visitors to our stand and talked to a lot of learners, teachers and people from right over South Africa about our awarenet programme. We promoted awarenet according to the theme and taught visitors about their digital private and public space in the Internet, the meaning of safety and security and related issues. We also presented our Life Player Project that we carry out together with Victoria Girls High School and the British Counsel. My best memories of are usually the wonderful people you get to meet, the many different learners that came past the VSA stand and the passionate people at SciFest sharing their love for Science. It’s hard work and long hours, but very rewarding!

As the term drew to an end it was time for a well deserved Easter break. I usually go to Cape Town to rewind and get ready for the second half of the year.

This year, we started our annual awarenet Peace and Music Project already before the famous Grahamstown Arts Festival, to have more time. The project involves music training for 5 different schools (Ntaba Maria PS, CM Vellem HPS, Khulitso Daniels SS , Good Shepard PS and Victoria Girls HS. The learners are taught how to write their own lyrics and compose a chorus to a backing, composed by Sonic Art Studio. Then they have to practice how to perform on stage for the annual awarenet Peace Day Concert held on International Peace Day (21/9). The songs soon sounded amazingly good and learners were ready to perform in the Noluthando Hall in Joza township. 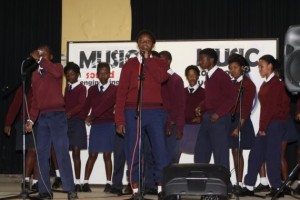 We were blessed with a nice big crowd that came and watched the awarenet Peace Day Concert. The spectators thoroughly enjoyed the concert. Our learners performed fantastically, they rapped and danced with great passion! I was really humbled by the way they were performing, giving everything and showing us that all is possible when you put the time and effort into something great like this! Although my favourite school didn’t win, I was still happy with the whole outcome of the concert: a great success, lots of talent and just an overall happiness all around. Lukas and myself also attended the recordings for the songs which was  done at the Rhodes Music Department after the concert and soon the CD will be launched. The music video of the winning song will be produced next year before the next round of the project. 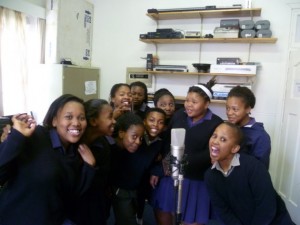 To some up the year of 2014, it has gone by so quickly. It was a great year, lots was done, lots was learned and so many close bonds made with learners and teachers. I was really blessed to have two wonderful German volunteers working with me for the whole year: Antje and Rieke. They were really a great help in all we did at the schools. They’ve been my right hand in all ways and I don’t think I would’ve survived the year if it wasn’t for them! Now, since September 2015, our new volunteer Lukas has taken their spot, who has also been a great help and I am looking forward to the next 9 months with him.