SciFest held from the 18th to 24th March 2015 in the monument this year. The theme being “the year of light” lots of schools visited the SciFest from right over South Africa. Eight schools that we teach awarenet to in Grahamstown  participated this year. With over 100 learners taking part in the project, they were divided into different groups to work on their SciFest project called “Life after School”. 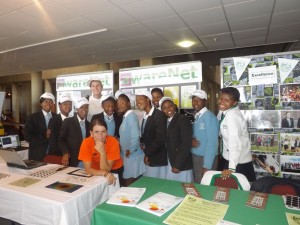 Within the project over 20 posters were created. Three posters were chosen as the winning posters and were displayed at SciFest. The groups of the winning posters were from Ntaba Maria and Archie Mbolekwa, as a winning prize they had the opportunity to visit the SciFest and spend a few hours exploring the exhibitors’ stands. Additionally they promoted awarenet at our stand telling some people who stopped by more about their SciFest theme and about their posters they created. The VG Girls promoted their school as well together with us showing optical illusions and doing different experiments with colours and separation of colours in water. With that some people were attracted to our stand but it was hard to interest them in the awarenet platform or our intentions as an NGO in general.
Because of the few visitors and the feeling of only a minor success this SciFest was a lesson for us to change our focus and strategy in the future to exhibiting more visualised and approachable experiments.