Each year VSA works together with the learners on the topic “health and fitness” including a culmination at the end of the term. During the awarenet sessions we either played soccer, dodgeball or frisbee or we worked on blogs and forum questions. This year the health & fitness day was celebrated on the 12th of June. Learners from five different schools participted in the event. In the beginning after having a little snack the karateka of the Joza Karate Club put their skills on stage and amazed everyone with different Katas and training fights. Afterwards the Mr. and Mrs. Fitness were determined within a sports-procedure consisting of pushups, crunches and star jumps. Zezuthu Fikani of the S.D.A School and Thanduxolo Rooi of Nombulelo P.S. won that competition. In the end the schools participated in a soccer tournament which was dominated by the Grade 9 learners of C.M. Vellem. 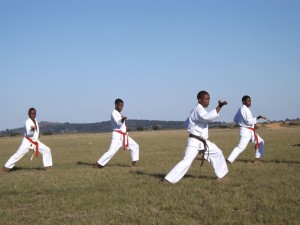 Overall it was an awesome day and we would like to thank the learners who showed up despite being in exam stress.

Also, we would like to thank the sponsors who facilitated this event namely Run/Walk for Life which sponsored R500 and water bottles, Albany business Machines which donated pads as well as Madhatters-Cake which donated a lovly cake.

Looking forward to hosting the next Health & Fitness project next year! 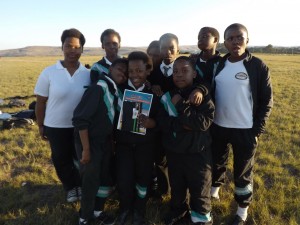