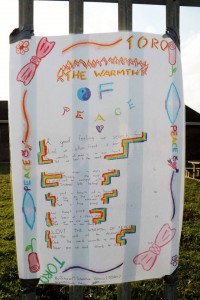 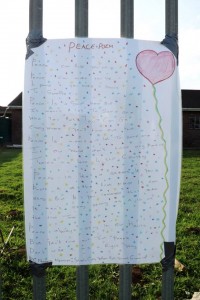 On the 21st of September 2015, we celebrated World Peace Day. To build up to this day, we did a variety of things to celebrate the real meaning of Peace in South Africa as well as in the rest of the world. The schools who participated in the celebration were C.M. Vellem HPS, Ntaba Maria PS, Khulitso Daniel SS, Good Shepard PS, Seventh Day Adventist PS and Archie Mbolekwa SS. We decided to become creative and to write a few poems about peace, the meaning of peace and how to create world peace. The learners were very creative writing their poems down in great expressions. Harry Owen, a local poet from Grahamstown, spent two additional sessions with the SDA learners assisting them in poem writing. The learners found this very educational. The poems were all collected in the awarenet Peace Project on the awarenet platform and one best poem from each school was chosen. The winning poems were printed on a big poster and decorated. Once the posters were completed, they were laminated. These posters were then put up on the fence of the Joza Youth Hub to let people know the real meaning of World Peace Day. 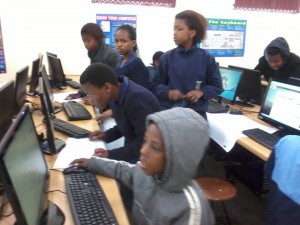 Good Shepard learners working on their posters and doing research on Peace.

Also, we decided to give back to one of the schools on that day. Together with the Ntaba Maria learners, we decided to spring clean the computer lab were we work on awarenet once a week. Due to the fact the the labs at schools never get cleaned properly, we decided to tackle the lab and give it a good cleaning. Nine learners took the task of sweeping, dusting and moving things around until the lab was nice and clean. We have decided to at least clean the lab once a week to dust and sweep. The peace day project has been a great success and lots was learned about peace, the meaning of peace and how to create peace….. 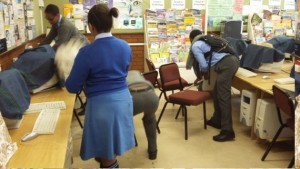 Ntaba Maria learners cleaning their Computer Lab in giving back to their School on world Peace Day.