This term, it was all about cultural differences and similarities between Germany and South Africa. We learned about German and South African cuisine, languages and popular sports. We wrote blog posts, answered forum questions and uploaded many different pictures on awarenet. For the last sessions, volunteer Larissa planned something special for her students to say thank you for a productive and fun seven weeks:
Learners received a certificate for regular attendance and commitment in class and had the chance to try original German food while watching a movie of their choice. Wurstsalat and Schwarzwälder Kirschtorte seem to be quite the hit in South Africa as well and you cannot go wrong with a Disney movie. 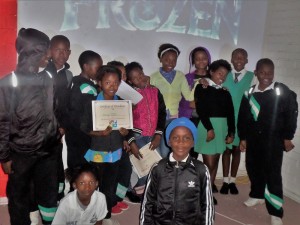 We wish everyone a great Easter break and hope to see our learners back at the Joza Youth Hub in April. Stay tuned for further information about our project during the second term and be part of the adventure!