The annual National Arts Festival shook the otherwise drowsy small town of Grahamstown into sudden life. The multitude of colourful and lively people descending on town was a total onslaught on the senses of the small-town soul, passingly giving Grahamstown the feel of an international metropolis. It was then that the Village Scribe Team decided to go with the flow and to get carried away by the creative vibes, seeking inspiration for their own work. 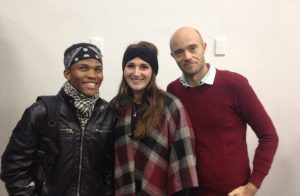 awarenet coordinator Kjetil went all out going to at least six shows starting off with “Ilembe”, a play about Shaka Zulu: “I was quite impressed! Not just because of its combination of brilliant acting and choreography, but also because it managed to express the fundamental truth that historical events are always open to interpretation. No actor played the part of Shaka, the main characters are his admirers and enemies, leaving the audience with the question whether Shaka was a national hero, a human monster or something of both.” Intern Mcvay accompanied him for the show and joined in the praise: “This was a very cultural and educative show which was mainly intuitive on the lines of the Zulu historical background. I enjoyed the soothing music a lot. It was so professional!!!”

For the upcoming awarenet Peace Day Project and Concert, we were constantly on the lookout for artists that could serve as role models and inspiration for our learners in terms of lyrics and tunes. We came across Nombasa, a local Grahamstown singer-songwriter who sings her own songs in isiXhosa with a thundering yet soft and pleasant voice. Sometimes she was melancholic as when singing about growing up without a father, a sad reality faced by too many South African children. Other times she sang enthusiastically and life-affirmingly about seizing the day and expressing oneself artistically; “write that book, sing that song, paint that painting”. In the same vein another Eastern Cape songbird, Msaki, captivated her audience barefooted with stark and soulful songs accompanied by a world-class band.

The team is currently trying to get in contact with Nombasa since it would be an amazing opportunity for our learners to work with and learn from her. Kjetil and volunteer Larissa further went to the Late Night Jazz Café at Saint’s Bistro where different jazz bands played every night. Watching all these shows gave us a better idea of what it takes to organise and host a successful event in regards of our upcoming Peace Day Concert.

The whole team went out together to watch “The 1976 Musical” which tried to link the challenges of the youth of today with those faced by the generation of 1976. Kjetil had mixed feelings about the show since “in spite of the singing and dancing capacity of the actors, the musical at times confused the audiences with its muddled message and its jumping between time eras.” Mcvay thoroughly enjoyed the performance and stormed the stage afterwards to take numerous selfies with the cast: “Now this was a very energetic and loud show, but it had a very educative aspect in it in terms of the Xhosa culture and history of Apartheid. It inspired me abundantly on the side of music and gave me a great idea for the Peace Day Concert.” Volunteer Larissa loved the show but agreed with Kjetil on it being a bit too loud, too fast and too muddled up: “I loved their singing and dancing, the actors had real potential, but it seemed like the acoustic in the hall was not right which ruined the otherwise great show.”

All in all, the whole team had an amazing festival time and watched numerous other acts, with Kjetil being more on the historical theatre side of life and Larissa jumping on her seat during dance performances and being in tears watching some of South Africa’s finest comedians. Mcvay probably had the busiest week since he did not only enjoy the shows, but also worked at a pancake food stall at the Village Green Fair where Kjetil and Larissa visited him several times – he has now been assigned to prepare pancakes for the office on a regular basis.