Looking back at my voluntary service in South Africa, there were more surprises than what I would have expected. Having been overseas in New Zealand for a year and having travelled to South Africa before made me think that I knew everything and what to expect. Little did I know that this year in South Africa would bring so many new experiences and also challenges.

My co-volunteer Kim and I arrived in Grahamstown with the expectation of finding a nice little home waiting for us. It all came very different when we had to move twice before we found our forever home. Or rather before I found it. Just after three months, Kim decided to leave the Village Scribe Association and Grahamstown to pursuit his idea of a voluntary service in Cape Town. Even though I understood his reasons for leaving, it had a major impact on me since I believed that we would spend the year together. I had not planned to spend all of my time with him, but it would have been nice to have someone around and to work with who is a bit more familiar since we had known each other for nearly seven months by then.

One of the good implications of Kim leaving though was that I was forced to make local friends here in Grahamstown and find flatmates to share an apartment with. They made my time here so much more worthwhile and I think it was the best decision for me to move in with South Africans. It has helped me so much more to understand South Africa and its people then if I had shared a flat with a German. It further gave me the chance to travel the country with locals, to spent time with my friends’ families and to be a part of very different segments of the South African society.

I have travelled incredibly much throughout the year and still have not seen all the places that I wanted to see. It gives me a reason to come back though and I am sure I will.

Work wise I must say that I was very, very lucky. I love the work I do or that I did for the past 12 months even though it was a lot more office and admin work as I expected. After three years of studying, I had hoped for a bit less sitting at a desk, but that is just me. Working for the VSA has taught me so much, especially when it comes to working as a team and for the same goals. I think it is very unlikely to find a work environment where the team works so closely together and everyone relies on each other. I was given a lot of freedom though to organise and plan my own sessions and I really appreciate the trust Anna had in me. It also gave me the opportunity to get more involved than what the voluntary service included and I am glad I accepted the nomination as chairperson for the Joza Youth Hub. It gave me an even deeper insight in the work of NGOs, their struggles and challenges. It was great to see so many different organisations in one place and to learn from all of them. I have met incredibly committed people who always put themselves last to help others and I have met incredibly selfish people who made everyone’s lives difficult. I am glad that I was able to make these experiences since they prepared me for the work life that might await me. 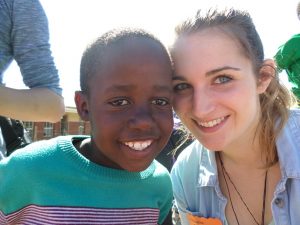 But I did not only grow fond of my work environment but also of my learners and I will surely miss them a lot. One of the greatest rewards at work was to see the kids’ development throughout the year and to know that I had an impact on that. I had never worked with children before and even though we have lots of children in the family and I babysit, trying to get school children’s attention and to teach them something is a whole new level. Kudos to all the teachers out there who are doing a great job and go all out every day to teach our future generations.

In the beginning, my learners were very shy and quiet whereas later they really started to trust me, told me about personal problems, shared stories with me and when I met them somewhere apart from the awarenet sessions, they always came running, hugged me, introduced me to their parents and it was such a good feeling. We have amazing kids we work with at the Village Scribe Association and we should never lose sight of the fact that they are the most important when it comes to our work. I think it is necessary to have a good relation to our learners, to know their names, birthdays and interests and I think keeping record of those things has been something that I successfully introduced at work. I am afraid that NGO circumstances like money issues and limited human resources sometimes make it hard to focus on what is most important since one is so busy trying to overcome all those challenges first, but I am convinced that the VSA is doing a great job and I am proud to have been a part of that.

Living in South Africa is a completely different thing than travelling through the country. It confronts you with (sometimes daily) issues like water shortages, dirty water and power cuts that are wildly romantic for us Europeans when we are on holiday, sitting around and cooking on the camp fire and swimming in the sea instead of showering. If you have to go to work though, do your laundry and do not happen to have a fireplace outside, daily life becomes a bit of a struggle and it can get a bit too much. It was a valuable lesson for me though and made me appreciate what I would have called “normal” before as luxury and something that should not be taken for granted. 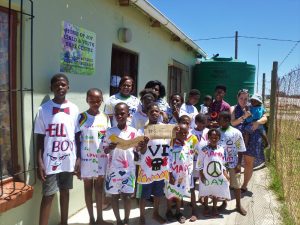