Our first month in South Africa and at the Village Scribe Association is already over! While the first week, due to all the new impressions, felt like an eternity, the rest of the month flew by very quickly. Mainly because it wasn’t exactly a slow start at work.

But let’s start at the beginning. We arrived on the 30th of August at the airport in Port Elizabeth. Unfortunately, even though we hadn’t been on the same flight, we both experienced that our luggage did not arrive. It was, however, after numerous negotiations with virtual telephone receptionists and airline offices all over South Africa, delivered to us at midnight on the next day. Our flight was followed by a six hour drive around the Eastern Cape as we brought two of our fellow German volunteers to their new home in a very small, but very beautiful village at the coast called Hamburg. That was on one hand very tiring, but on the other hand great, because we got a first impression of the scenery.

The following day we finally met the South African part of the awarenet team, including our predecessor Larissa. However, she was already leaving one day later. Her farewell party was very emotional and even though we are two persons replacing one, it made us a bit unsure if we would be able to fill her shoes.

During our first weeks at work Kjetil showed us everything and took us to all the sessions so we could meet the learners, which was a great experience. We also realized how small the team actually is, and how much autonomy and responsibility we will therefore have. 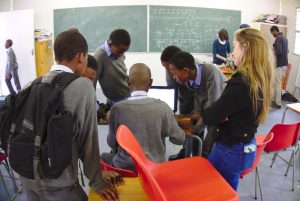 Another highlight was our orientation weekend. Jonas, our Mentor from SAGE Net, picked us up and we spent a weekend in the above mentioned village Hamburg together with all the other SAGE Net Volunteers in the Eastern Cape. We talked about how our first weeks in South Africa had been, how we could address issues that might have occurred during that time and about our regionally specific security situation. But we also had a braai and a kayak tour on the Keiskamma River which turned the weekend into a very great experience. It was also nice to meet our fellow volunteers again, and we all made plans to meet each other more often. 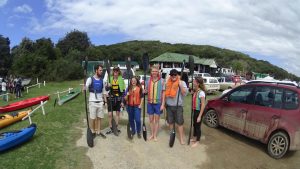 Our third week at work was by far the most challenging so far. Kjetil went to Cape Town for the North South Conference, which left us with the task of completely taking over the awarenet sessions with learners, while also having to continue preparing the Peace Day concert. It was a little bit like learning to swim by being thrown into the water. It was pretty stressful, but worked surprisingly well.