This year the Village Scribe Association showcased its awarenet program at the North South Conference in Somerset West, Cape Town. The conference, which is in its fifth consecutive year of existence, is aptly named North South as its co-organizers, False Bay College in Cape Town and Haugaland High School in Norway are situated close to the extreme south and north of their respective continents. The conference has since its inception focused on how ICT can be integrated within education and targets South African TVET Colleges , these are tertiary institutions offering vocational and educational training. 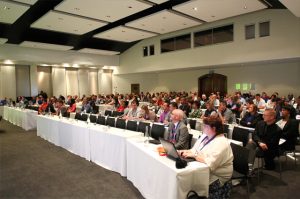 Delegates at the North South conference

The theme of this year’s conference was “the connected college”, coupled with the slogan : “have you found your mojo yet?” As mojo traditionally means a spell or charm, the red thread of the conference was to find that right approach to modern information technology which will make a college attractive to students and at the same time spellbound them enough to make what is taught stick in the long run. 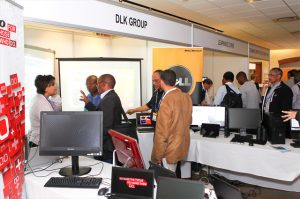 Commercial exhibitors at the conference

As a David against the Goliaths of conference presenters such as Microsoft and Amazon little awarenet was also given a presentation slot where we highlighted that the fruits of the IT revolution can only be spread to wider sectors of the world’s population if conscious efforts are made to implement technology directly on a grass roots level. We told the conference participants that by exposing school learners in Eastern Cape, one of South Africa’s most deprived provinces to awarenet we feel that we are making a small but important contribution to that goal. 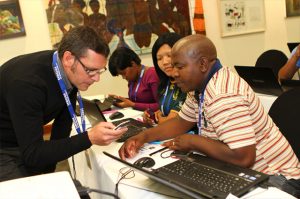 Looking for their mojo?

Many conference delegates found awarenet attractive because of the relative ease our eLearning platform can be introduced through among other things its offline functionality and its mobile servers. We received some very encouraging requests from TVET colleges in the Eastern Cape who could be interested in future cooperation. Until now the focus of awarenet has been almost exclusively on school learners but in principle the platform can just as easily be used by TVET college students as its structure allows for any user-created content. The awarenet team is now therefore looking into a possible expansion to TVET colleges, an exciting development which would spread the scope of the platform into new sectors of South African education. The new users will then hopefully discover that awarenet is their technological mojo.