The Grade 6 learners of the Grahamstown Adventist Primary School in the city of Grahamstown have been having poetry sessions organised by awarenet with one of the most well known artists in the Grahamstown community. He has been writing articles, stories and poetry… he is Harry Owen!  (You can find him on Facebook or at myspace.)

The training sessions have been taking place at the Joza Youth Hub Computer Lab. They have been “remarkable”, the learners chorused. They have a number of things they like from being with Harry, such as,  he gives “good life advice” and is a “fun teacher”.

On the first day, the Grahamstown Adventist Primary were given a presentation by Harry and listened to him reading poems, simply to give them a first impression and let them get the hang of how poems are read and sound.

On the second day the learners learned how to write and construct a poem. Harry taught them that the first thing to do when constructing a poem is to get an idea of you want to write about, like a topic or theme.

On their third day with Harry, he suggested that learners write their own poems online on awarenet for him to be able to give feedback on each poem.

The learners are always thrilled to spend time with him, and when I asked them whether if they have anything they don’t like about the poetry sessions with Harry, they exclaimed discontentedly: “the time is too short!” The learners have posted a few of their own poems and comments on poems Harry did with them on awarenet, using the blog posting tool on the platform itself:

Harry is also enthusiastic about the learners, he sees potential in them and has hope of some becoming poets. He told the learners they shouldn’t : ” …throw away the lines you think are not good enough, those are the ones that really are.” 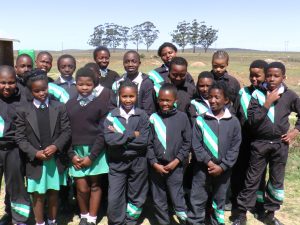