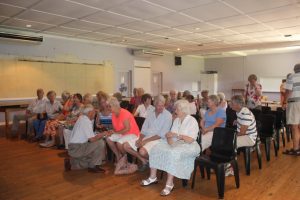 A sizeable crowd listened attentively to awarenet trainer Kjetil Torp talking about the joys and travails of the awarenet programme. Assisted by volunteer Chiara Brendel, Kjetil spoke about how awarenet originated as a response to underutilised computer labs and slow integration of ICT in the South African school curriculum. He further told the audience that the awarenet program helps learners increase their writing, reading and editing skills through its emphasis on independent creation of texts.

The principle behind awarenet software and its offline functionality through mobile servers was also touched upon; the participants seemed to grasp these technical details well, disproving the popular myth that the elderly are lost when it comes to new technology.

Lastly, the University of the Third Age was briefed about the many local projects awarenet learners participate in such as the annual Peace and Music Concert, the creation of video documentaries on local social issues and the writing of newspaper articles for leading Grahamstown newspaper Grocott’s Mail.

The audience, which seen in its entirety must have comprised several thousand years of life experience in Grahamstown, clearly appreciated the local angle of the awarenet programme and the partnerships it has built with other stakeholders in the Grahamstown community. During the question session following the talk members of the audience offered useful advice and tips about university departments, companies and other non profit organisations which it would be natural for the awarenet program to plan future activities with. Many were also eager to help find ways for the awarenet program to achieve financial sustainability, offering hope for the future of awarenet through a section of the community with much lived past.