In February, the Village Scribe Association had to face a new and complicated challenge: the recordings of last year’s Peace Day songs. As most of the groups which participated in the September Peace and Music Project were in the last year of their school, we had to find them in their new schools.  As they are now scattered across a multitude of schools in town and the township we had to put in a lot of work to locate the learners, make appointments with them, fetch them and bring them back home. Even though most of our learners have smartphones and WhatsApp, making appointments using that medium didn’t work that well because some of them changed their numbers or didn’t have data.

Some of the students had also moved to other towns or lived on farms too far from Grahamstown to bring them home after the recordings. So we had to concentrate on the most important students: those that performed solos or rapped.

We started at the 7th of February and it took 6 recording sessions, it was worth the effort though, we think the CD with the Peace and Music songs will turn out great! Particularly the winning song from Ntaba Maria School we think we could turn into a local hit, it’s a hip-hop song with great beat, rhythm and text! 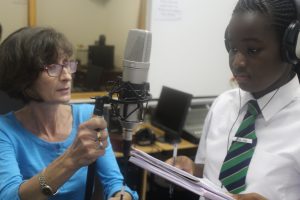 We are still collecting the necessary funds for producing the CD.