I presented the awarenet program to the local Grahamstown chapter of Rotary International on the 8th of June. awarenet activities have previously been funded by another Rotary club, namely the German Rotary Club in Pirna/Sächsische Schweiz.

In the talk I focused on how ICT in general and the awarenet platform and program in particular can play a role in alleviating some of the main maladies in South African schools. I discussed the state of ICT infrastructure in Grahamstown and the wider Eastern Cape and told the audience how awarenet intervenes to support computer labs without both internet and qualified personnel. I also gave a brief overview of the activities the awarenet program does in connection with its ICT training such as the peace and music project, video documentaries, the awarenet Open Lab and the impending teacher’s course. 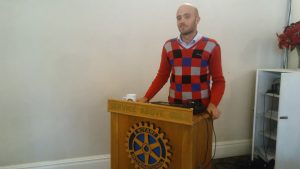 The Rotarians showed great interest in the awarenet program and thanked us for the work we are doing with mostly underprivileged children in Grahamstown townships. As the Rotary Club in Grahamstown previously has contributed in establishing computer labs in the city the audience appreciated that our organisation is working towards making optimal use of these computer labs.