The VSA decided that it was time to give true ownership of the VSA Trust to the people working on site in the Joza community. Since Anna and Ron Wertlen moved to Berlin a few years ago, new staff was found and the awarenet program has undergone quite a few changes over the years following the needs of the South African youth and teachers.

While Anna and Ron stay on the board of the VSA e.V. in Germany, which is a charity organisation supporting the VSA Trust financially, they have now resigned from the board of trustees in South Africa. While we believe that it makes total sense, it was also a requirement of various funding organisations, which we now follow.

Before Anna and Ron resigned, a new trustee was appointed to meet the requirements of a minimum of three trustees on the board. Rod Amner, researcher and lecturer at the Department of Journalism and Media Studies at Rhodes University turned out to be the perfect addition to the team due to his outstanding knowledge and experience in the field of educating and citizen journalism. He joins Sarah Hanton, teacher and Head of IT at Victoria Girls High School, and Craig Renaud, advocat and lecturer at Rhodes Law Department.

The VSA Trust already made great experiences in working together with Rod Amner in the awarenet Open Lab project, which he initiated, so this was a logical step and we are very grateful and excited to work together with him more closely.

The amendments were celebrated during a feast at the Rat & Parrot the same night, on the 26th of October 2017. From the left you see Rod Amner, Xenia Baartz, Max Resch, Sarah Hanton and Ronald Wertlen. From the right you see Kjetil Torp, Clement Simuja and Anna Wertlen. 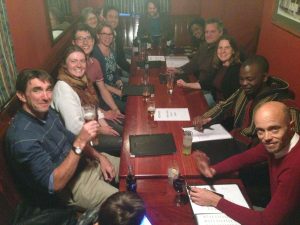