26 year old Luvuyo Nojoko from Grahamstown/Makhanda managed to get a job and get inspired to start his own community project through awarenet!

Towards the end of 2018 Luvuyo was looking for a job but had nowhere to access computers and the internet - vital 21st century tools to get full information about the local job market and to be able to email applications and CVs to prospective employers.

Luvuyo's problem was a classic catch-22. As he was jobless he didnt have money to pay for accessing the web at an internet cafe but in order to get a job he needed to access the internet.

This is where awarenet's Open Lab based at the Joza Youth Hub came to Luvuyo's rescue - there just like other community members he could access computers and the internet at no cost. At the awarenet Open Lab Luvuyo created his own email address, diligently searched for jobs and emailed applications on a daily basis for several weeks. One day he received great news, he was called in for a job interview as night receptionist at a Makhanda/Grahamstown guest house. He got the job and is now employed full-time on a permanent basis!

This positive experience with awarenet gave Luvuyo inspiration to start creating his own little community project in his neighbourhood of Extension 6 - there he witnessed children in primary school age playing on a local rubbish dump in the afternoons after school. Luvuyo says he wanted to teach the kids "everything I saw by awarenet" - most days in the afternoons before he goes to his night receptionist job he therefore sits with a group of kids teaching computer skills with the help of his newly bought laptop. He also helps the children with their home work and in the spirit of awarenet let the children play on the laptop to become familiar with the use of a computer - none of children have access to computers neither at school nor at home.

Luvuyo dreams about opening a proper computer centre in his neighbourhood in the future to bring ICT skills to more kids in his community - we hope we at awarenet and other stakeholders can help this dream come true! 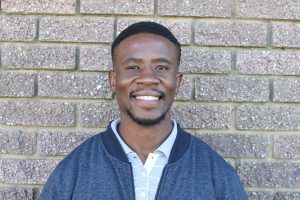