by Antje Hering and Rieke Heitmüller 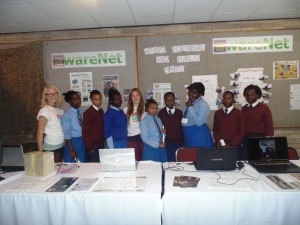 Village Scribe Association and eKhaya ICT members Terri-Lynn Penney, Rieke Heitmueller, Antje Hering and Richard Strickland with help from CM Vellem, Ntaba Maria and Victoria Girl’s learners presented the awarenet programme at the Science Festival Africa 2014. awarenet is a new interactive education and communication platform for schools, designed to create a safe environment where student communities at schools across the country can interact. 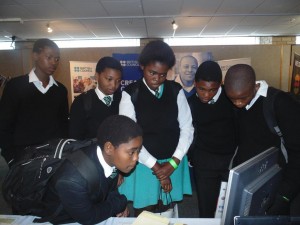 The SciFest took place at the National Settlers Monument in Grahamstown, from the 12th of March to the 18th of March 2014. Companies and organizations from all over South Africa and Germany introduced their work to the visitors according to this year’s topic “Into the space”. Local schools as well as other schools from the Eastern Cape like Port Elizabeth, East London and Mthatha visited the SciFest and took part in its workshops.

The VSA presented the new picture login of awarenet and how the new KaLite (an offline version of the KhanAcademy) was integrated into awarenet. 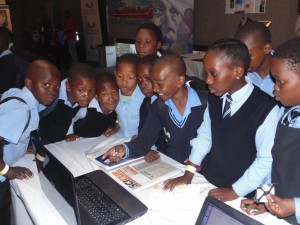 Together with the awarenet users – learners from CM Vellem, Ntaba Maria and Good Shepherd School – we presented our project “About personal and public space”, on which we worked for about 6 weeks. It deals with the topic safety & privacy in the Internet, privacy in general and the conflict between safety & privacy. The learners had to write blogs, answer forum questions, interpret a cartoon and create posters and photo stories during the project. 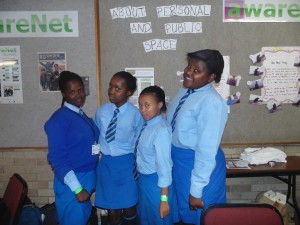 The SciFest was a great success, where we established contacts with interested teachers, students and other organizations. It was our first time at the SciFest and we had a lot of fun and met people from all over South Africa, which was really exciting!