The awarenet Peace Day concert – a Day to remember!

After many weeks of hard work dedication and hours spent on preparing for the Third Peace day Concert the time finally arrived for the 5 school from in and around grahamstown to preform their own Peace days songs at the awarenet Peace day Concert. Very excited all the learners arrived at the concert venue smartly dressed in their schools uniforms chatting away about how they are going to move and sing on stage. Small groups of people started gathering in the hall sitting down looking around waiting anxiously for the concert to start. A very excited atmosphere filled the hall as the Mc went on stage to the start the concert. People were clapping as he entered the on stage in a very professional way he introduced himself to the audience he Introduce the judges and the schools partaking in the concert.

A little entertainment was given from a student group calling them selves Elastic,a very upper class rapping group that preformed.They got the audience singing and clapping along while the performance was on the going on.After a superb performance from Elastic it was now time for The different School groups to preform.Lots of the audience was filled with the family and friends of the learners preforming and they seemed very eager to see the hidden talents these kids consisted off.When the first group came on stage I was filled with pride and emotion knowing the hard work and dedication that went in preparing each and every one of the youngsters for this concert.They went on stage each and every learner from the different schools and sang and danced their hearts out.I knew that deep down inside of themselves they all wanted to win the competition with sincerity.After every performance the crowd would go wild screaming and clapping for their favourite group. 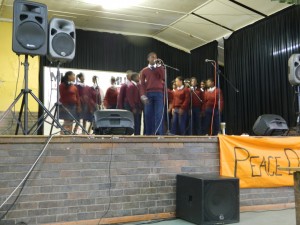 I think the judges has a very hard decision as to who should be the winners they thought every group was brilliant and took quite a while to decide on the overall winners of each category.After a long buzz they finally came to their decision.I must admit the proudest of principles came to support he learners Mr Radio from Khulitso he really took pride in each and everyone of them.Some of the teachers from Ntaba and C.M Vellem also came and gave their support towards their learners Preforming.Lots excitement all around as the winners where announcement.Kids went mad running on stage when they heard there schools names called out,happily they went on to collect there certificate.The Media Grocotts Mail was also there clicking away taking photos after the concert they were ask what they thought of the concert? They were very impressed by the way the kids preformed they way the sang and also Wow by the fact that all songs were written by the kids.

I think the concert was a great success. And so did the learners. Find their blogs here.