We are very happy and proud that our 3rd awarenet Peace Day Concert was another great success!

For a period of 2 months, all learners were trained by Zukani Budaza, Lunga Heleni and Corinne Cooper (Sonic Art Studio) how to write lyrics, compose melodies, rap & sing and how to perform while they documented and discussed the project online on awarenet, which was supervised by Terri-Lynn Penney (VSA). All songs contain the words “awarenet”, “peace” and “love”.

The projects has its peak at the public Peace Day Concert, which is related to the Peace One Day campaign. All learners performed on stage to compete for 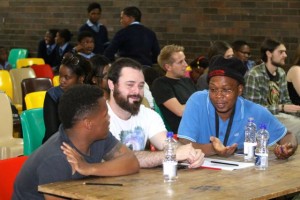 The competition was followed by two guest artists, of which one was the music band “elastic Band”. They also perforned at the last year’s Concert and Tsukudu Moreng is one of the two HipHop artists. The other guest was Ayubulia who performed a one man poetry slam.

Finally, the certificates and prizes were given out to the best female rapper Okuhle Yoli (KDSS) and the best male rapper Luvo Ngwala (NMPS). They each received a pair of head phones. Runner-ups were Phelela Seyisi (VGHS) and Asemhle Singata (GSPS). 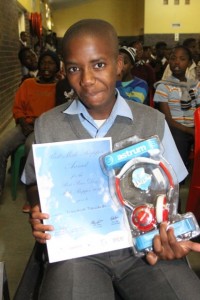 And finally, the best song was won by Victoria Girls HS (Sisanda Ncetani, Celine Igiraneza and Phelela Seyisi). They will receive a professional music video like the winners of the previous years. The runner-up was Khutliso Daniels SS. Huge congratulations to all of you! 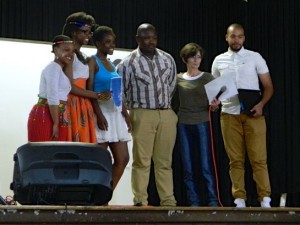 The Master of Ceremonies was Matt Maralack. 350 excited people watched the show. A team of Rhodes students filmed the concert and will produce a video for us. Grocott’s Mail published two articles. The second is here. The project was funded by Rhodes University, Sonic Art Studio and eKhaya ICT.