During a few days in mid-April, under the auspices of a benign Highveld sun, a mishmash of dedicated and articulated voices could be heard penetrating the crisp air of the Johannesburg suburb of Benoni. Though the words escaping the dark and windowless vaults of the conference centre were unmistakably of English origin, the accents betrayed that the instigators of the words came from a variety of linguistic backgrounds, such as German, Zulu, Afrikaans, Tswana, Xhosa, Sotho, Tsonga and Portuguese. 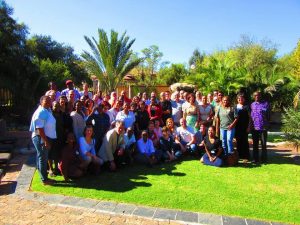 The complete delegate count at the conference

The weltwärts programme of the German federal government, which supports the sending of German volunteers to other countries and the receiving of foreign volunteers to Germany, had drummed together representatives of Southern African and German non-profit organisations which are beneficiaries of the programme. The awarenet team is also enriched by the weltwärts programme as we each year receive two German volunteers whose contribution is invaluable to our organisation. 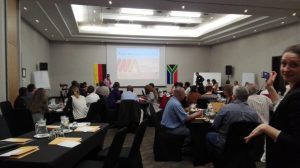 Pondering the role of intercontinental volunteering

Most of the South African provinces were represented at the conference, in addition to organisations from other countries of the subcontinent such as Botswana, Namibia, Lesotho and Mozambique. SAGE Net, the South African German Network, which with one organisational leg in Germany and one in South Africa embodies the spirit of cross-continental cooperation, took care of all the practicalities around the conference, its staff diligently leading the proceedings with a winning combination of German time management and Southern African humour. Not all the conference delegates knew the lyrics of “Shosholoza”, the evocative Southern African song celebrating and lamenting the sufferings of the mineworkers on their train journeys to the mines. However, after the daily morning drill where with Prussian discipline the whole conference was given no choice but to try to sing and move their bodies accordingly, even the delegates from distant Northern lands had learned a smattering of the words of “Shosholoza” and there were some promising signs of stiff limbs loosening up and letting themselves be carried away with the rhythm. 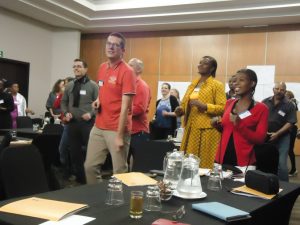 Shosholoza gets the delegates on their legs..

This invigorating morning routine made it easier for newbies to the organisational structure of the weltwärts programme to get through the jungle of Teutonic acronyms they were initially introduced to. Reaching the open plains of enlightenment they realised it is all quite straightforward: An organisation in Germany is keen to send volunteers to Southern Africa, it then finds a partner organisation in Southern Africa which wants to receive these volunteers, this happy marriage between two partners is consequently blessed financially by the weltwärts programme, which in turn gets its money from a higher power called the The German Federal Ministry for Economic Cooperation and Development (BMZ). 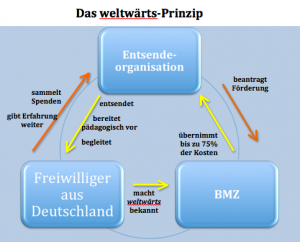 Having thus been enlightened, the delegates busied themselves with an array of heated debates which crystallised some of the main issues concerning the volunteer programs: What do German volunteers contribute to Southern Africa? Is their role about transferring skills from the developed world to deprived communities in Southern Africa which are lacking such skills ? Who benefit most from the experience, German volunteers or the locals receiving them? And bearing in mind that the majority of German volunteers are fresh out of high school and in a gap year before further education, is it really true that the German volunteers are necessarily so much more skilled than the locals? On the other hand, maybe the skills transfer question is irrelevant, isn’t the goal of the programme really to teach both volunteers and their partners in Southern Africa about the importance of international cooperation and solidarity? 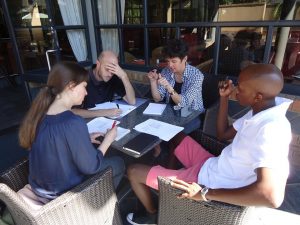 Some are winning the argument, some must give in..

Following this discussion about German volunteers the conference took a natural turn towards another dimension of the weltwärts programme which is growing in importance and numbers; the sending of volunteers from Southern Africa to Germany or what in the programme is elegantly known as the South – North component. Sarah Fina, a 19 year old from Walmer in Port Elizabeth who newly returned to South Africa after a year as a volunteer in the German town of Oldenburg, charmed the conference with her self-confidence and knowledge of German. Having worked with youth and culture during her volunteer year, she clearly personified that not only is a year as a volunteer in Germany a great way to learn about the wider world for a young person from Southern Africa, but also that volunteers from Southern Africa can contribute something to German society. A rare consensus spontaneously manifested itself among the delegates, everybody agreeing that as far as possible Southern African partner organisations should take advantage of the increased opportunities for sending volunteers to Germany. 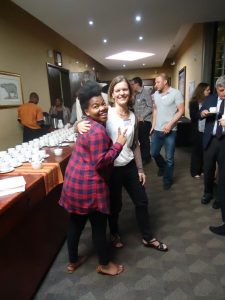 Sarah Fina, the homecoming star of the conference

The controversy and debate soon returned among the delegates though as a panel of representatives from United Nations Volunteers, African Union, South African and German government ministries, South African business and South African civil society debated the role volunteering can play in sustainable development. The representative of the South African government said that government within five years will establish a programme where a million South African volunteers will be sent to deprived communities around the country, among some of the delegates this statement arose a certain degree of skepticism. The cynics among the delegates also felt their position confirmed by the representative of South African business who held that the major investment bank he works at is more than willing to build partnership with and support civil society organisations, as long as such partnerships can be shown to increase long term shareholder value. However, at the end of the day everybody in the panel agreed that volunteering can make a huge difference to human development worldwide and that it is necessary for both governments and business to support more such grass roots initiatives for international cooperation emanating from organisations within civil society. 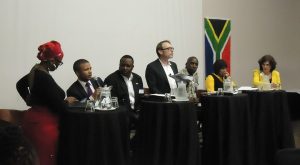 The last part of the conference ended on a brotherly and sisterly note with further discussions about the newly established Southern African weltwärts Network (SAwN), an umbrella organisation intended for all the partner organisations of Southern Africa participating in the weltwärts programme. As it was lamented among many delegates, the German volunteers in South Africa are often connected through a variety of organised activities but the organisations receiving them often work in isolation. SawN has been established to alleviate precisely this isolation; it is intended as a platform where weltwärts partner organisations on the subcontinent can exchange experiences, formulate common policies and represent these policies in central weltwärts organs. 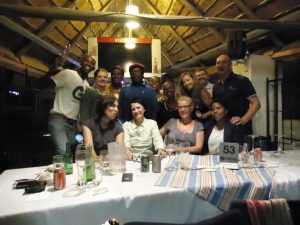 It was therefore, in spite of the verbal bruises obtained from the intellectual battles the previous days, a united bunch of conference delegates who on the evening before the closure of the conference launched itself collectively onto the tourist trap of Vilakazi street in Soweto, the old street of Nelson Mandela and Desmond Tutu. Seated at a restaurant with traditional African food the delegates did not take long in getting up and moving to the rhythmic music, undoubtedly helped by having had their dancing skills honed every morning the last days. And up into the dark skies of Soweto streamed happy and content voices in German, Zulu, Tswana, Portuguese and many more languages and accents, boding well for the future of the partnership in volunteering between Southern Africa and Germany.