Some general facts about our work: 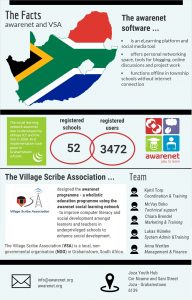 As usual, we conducted awarenet training throughout the year and carried out various project.

To showcase the use of our awarenet platform for those projects we created this infographic: 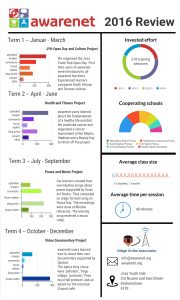 In total, the awarenet team had 218 training sessions with an average length of 48 minutes. We worked together with six different schools and taught a total of 8 groups.

In the first term, we started with teaching our new students the basics about working with computers and the internet, and helped to organize an Open Day at the Joza Youth Hub, where we and four other NGO’s have our offices. Later we compared food and culture in South Africa and Germany in our Culture Project. Having our volunteer Larissa from Germany on site helped a lot in making it more lively and interesting.

The second term’s topic was ‘Health and Fitness’. We talked about the fundamentals of a healthy life and diet. The highlights of the project were a soccer tournament and a ‘Beauty Day’.

The third term was the most exciting one, because for the fourth time we carried out our ‘Peace and Music’ Project. In cooperation with the Rhodes Department of Music and Musicology and the Sonic Art Studio we helped our students to write their own rap songs about peace, which they presented in a competition at our concluding ‘Peace Day Concert’. At the moment, the songs are being recorded at the Rhodes University recording studio and we will produce a music video for the winning song from Ntaba Maria Primary School.

During last term our new German volunteers Chiara and Lukas implemented a new idea for our Community Engagement Project.  Together with our learners they developed concepts for short video documentaries about topics from their daily life and environment. The topics they chose were ‘pollution, ‘Fingo village’ (a historical township in Grahamstown), ‘Portraits’ and an advertisement for a café at Ntsika Secondary School in the township, which is run by an educational NGO called ‘Inkululeko’. Another group addressed the ‘Fees Must Fall’ protests, where students all over the country demonstrated against the increase (and later the existence) of university fees.

Mcvay, a former awarenet learner who has subsequently been with us as an intern for the last two years, supervised his first group of grade 8 students at CM Vellem Primary School. He worked as technical support and maintained our computer lab. He furthermore was the secretary of the Joza Youth hub until September and the MC at our Peace Day concert.

Larissa worked as the chairperson of the Joza Youth Hub and aimed to improve the cooperation of the NGOs that are based at the Hub. Her biggest achievement in this position was the introduction of an Open Day at the Joza Youth Hub in order to establish a better connection with the local community. After she initiated the third term project, our new German volunteers took over in September and organized the ‘Peace Day concert’. Later they carried out their project in the 4th term, which they are still working on. In March, they will go to a mid term seminar of their sending organisation SAGE Net. that takes place in Hermanus. At the end of August, they will finish their work at the Village Scribe Association and hopefully pass their work on to the next volunteers.

Our teachers course is making progress as well. Kjetil, who will conduct the lessons and joined the team for that purpose in February, finished the application for the SETA accreditation, which was sponsored by the Rotary Club in Pirna, Germany. We are now waiting for their site visit and are looking forward to start the teacher courses later this year.

In 2017, we are going to continue our work with two new groups from Archie Mbolekwa Primary and CM Vellem Primary, and we will continue with grade 7 from Grahamstown Adventist Primary, grade 11 from Khutliso Daniels Secondary and grade 9 from Ntaba Maria Senior Primary.