During the Grahamstown National Arts Festival which took place last week we took some of our learners out to see "The Xhosa Chronicles", a play about Xhosa culture and what difficulties modern Xhosa people face whilst looking back at their history. Kjetil, Xenia and I were accompanied by our lab supervisors and a member of the awarenet Journalism Club.

After organizing transport to town we all met in front of the Victoria Girls High School, which also hosted this years' market, waiting eagerly in the queue to see the play. The play itself, whilst directed in a very modern and minimalist way, looked at the troubled history of the Xhosa people and their interactions with the British in particular. The play was centred among an imaginary tribe and its elder telling stories about the past, with the youth disputing the stories that they are being told.

Unfortunately, the play was tainted in a clear black and white contrast, white people being the devil themselves, whilst the Xhosa were innocent souls being poisoned by the western lifestyle. Now the topic itself is interesting, however the directors and writers seem to have forgotten that the greatest pleasure of watching political plays lies in understanding the message that is being told discretely. Some of the greatest drama masterpieces like Gerhart Hauptmann's "Vor Sonnenaufgang" or "Before Sunrise" show the influence that alcohol has on the German society in the 19th century, a topic similar to the "poison" used in "The Xhosa Chronicles". Whilst sitting in the theatre however, I felt like someone was sitting next to me and shouting their political agenda into my ear, using a megaphone just in case I would miss it.

The play acted as a good team-building activity though, with lots of laughs being had before and after the play. The common day was concluded at the Village Green Market, just on the premises of VG High School, as previously mentioned, with Thanduxolo and Milani having some Rösti! 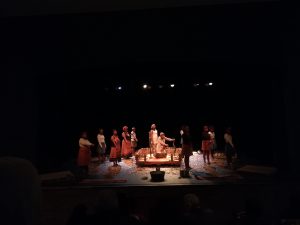 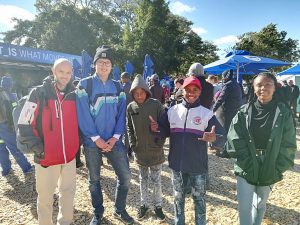