Taking inspiration from one of the youngest global change activists Greta Thunberg, we decided to make a small step towards global climate change by tackling a locally wicked problem of plastic litter and inadequate litter disposal facilities.

The global activism with plastic pollution has seen the issue of single use plastic waste coming to the fore. Litter is a real buzzword at the moment, with plastic litter being the central focus. Thanks to Sir David Attenborough’s recent documentaries, people’s eyes are now being opened to the true extent of the world’s plastic dependence and the related litter problem. An environmental education project to connect the Joza Youth Hub community with litter and pollution issues was envisioned, and saw a “Little litter leaders” project implemented during the schools’ holiday week. The program sought to inform participating young learners about single use plastic and its impact on the environment, human health risks and its impact on global climate change. However, ongoing challenges in the Makhanda municipality’s (formerly, Grahamstown) service delivery with litter/waste removal allows for expansion of the issues of single use plastic to create a program with litter awareness.

Up to 28 young learners gathered for litter awareness activities, which included watching videos on litter collection, ecobrick-making and litter pick up and separation. 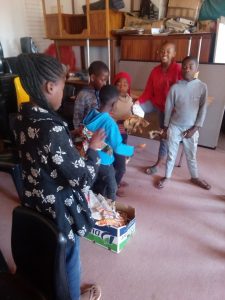 When participating young learners were asked about litter, and why there is such concerns about litter – they were all onboard about the issues of waste and litter removal. When prompted to share what should be done with snack packaging like chip bags, sweet wrappers and pop candy sticks, juice bottles and other food packaging items they all concurred that litter should be placed in bins. In the absence of litter bins they’d pocket their litter and discard it in the nearest bin. All agreed that throwing litter on the Joza Youth Hub grounds is a no-no, and they’d take the initiative to encourage others to keep the grounds clean and litter-free by informing on the slogan “pick litter up and bin it”!

After watching a fun anti-litter video, participating learners were shown examples of common paper and plastic food packaging. Together with the facilitator, the group explored how plastic and paper are made, what happens to these in landfills and why plastics are a particular problem; thereby highlighting the single use plastic issues.

Energetic groups together with their appointed “Little litter leaders” went around the Joza Youth Hub grounds collecting paper and plastics. Groups were guided to identify the type of litter they had collected and separated these into piles of paper or plastics. Enthusiastically the groups then discarded the litter into the colourfully painted tin bins labelled for paper and plastic litter.