Awarenet learners as well as others from different surrounding schools attended a documentary screening which was held on the 25th of August 2021. Scifest Africa in collaboration with Rhodes University and the Makhanda community worked together on producing a documentary which is aimed at promoting household electricity savings using user-driven and co-designed electricity-saving tips.
The Scifest Africa team held various screenings of this documentary around Makhanda, including at our own Joza Youth Hub. After the screening of the documentary, there was a question and answer session where learners got to engage with the hosts on different energy savings solutions. The documentary will also be screened on other platforms which will reach households outside of Makhanda, this is an effort to help reduce Eskom’s load, resulting in the end of load shedding 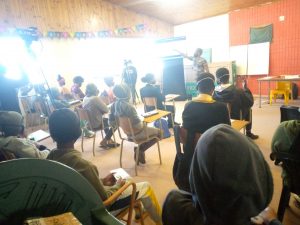