The Maths programme that Awarenet and Inkululeko are collaborating on has officially started and it has seen a very positive response from learners, teachers as well as parents. The programme started on the first of week of February and is being implemented at three different venues on a daily basis. We are using our computer labs at the Joza Youth Hub and after having spoken to principals, we managed to secure a classroom at Nathaniel Nyaluza High School were we make use of tablets, and we also using the computer lab at Ntsika Secondary High School. All three venues have a good internet connection, which is very vital for accessing the Olico website. 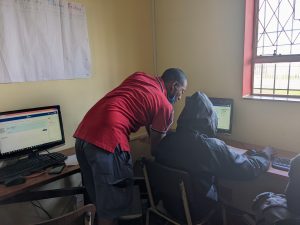 The initial plan was to recruit 100 grade 8 and 9 learners combined from the six local high schools but we managed to recruit 150 learners. The learners are split into the three venues, with grade 8s attending Mondays and Wednesdays at 15:00, and grade 9s attending Tuesdays and Thursday at 15:00. The Friday session which is also at 15:00 is reserved for learners who happened to have missed a session or the tutor feel needs extra help.
We have organized that learners going to the different venues get transport from their respective schools when school comes out. These learners then get to their venues and are provided with a snack and are given time to eat before starting their session.

The principals and Maths teachers at the various schools have been very instrumental in ensuring that our learners attend the sessions. We have also managed to get parents involved via a physical parent meeting as well as having them on a WhatsApp group where we communicate any relevant information.
We were fortunate to also recruit tutors who are very passionate about Maths and are able to keep the learners engaged and motivated.