Theater, music, comedy … the variety of performing arts during the National Arts Festival was huge, and Awarenet used the opportunity to invite learners to shows in these very different genres. It is not only Makhanda’s most characteristic annual event, but even said to be the biggest arts festival of the whole continent. However, as live events were cancelled due to covid, the last NAF took place only in 2019, and everybody – locals, visitors, and of course artists – was keen to experience real interaction, culture without masks, sold-out venues and the busy Village Green market area again. 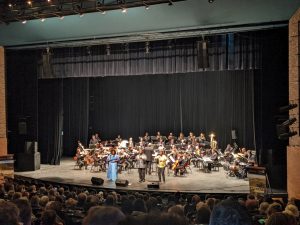 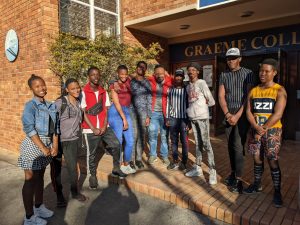 Our first own excursion led the learners to a comedy show about the everyday life of a stepfather with his family, and the laughter from the audience showed that the humour about the weird situations in family life was relatable to many. The second show on our program was literally called “Kak”, taking place in a community having to struggle with landfill, but also the consequences of the drastic government measures tackling this. Strong pictures and a lot of action on stage made the performance a lot more lively than the often dusty charme of classical theater plays.

After 10 days of cultural life, encounters with old friends and a little bit of theme park feeling in the small town of Makhanda, a show of the Eastern Cape Philharmonic Orchestra marked the finale of the festival. Taking place at the biggest venue available, the monument’s hall with almost 1.000 seats, the orchestra and three soloists brought new life to well-known South African classics, such as Vulindlela, Asimbonanga, or Pata Pata. Awarenet is grateful towards the festival for donating tickets for this special event, and now as the dark winter days are no more illuminated by the spotlights of the performing arts, everybody is looking forward for the National Arts Festival 2023.