On the 25th and the 27th of March 2014, Antje Hering and Rieke Heitmueller visited the DSG (Diocesan School for Girls) private school in Grahamstown to give the learners the chance to be part of the awarenet & LifePlayer Project. Here is Rieke’s report: 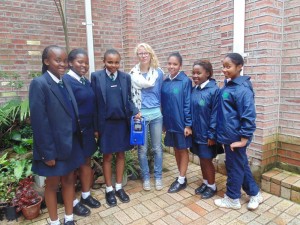 “The LifePlayer project is my first own awarenet project. I am working together with ten girls from the Victoria Girls’ High School (VGHS) and I am assisted by Antje Hering and supported by Sarah Hanton, awarenet trainer at VGHS. We already started this project at the end of January 2014 and had a few drama sessions together, before we started to prepare and record fairytales and fables onto the LifePlayer in the second school term.
The LifePlayer, produced by LifeLine Energy and supplied by the British Council, is a portable solar and wind-up radio and mp3 player.
At the end of the LifePlayer project, we will visit primary schools in the township in Grahamstown and will teach students in grade four to six in reading English. The Victoria Girls have to prepare the lessons by themselves and the students in the primary school can listen to the recorded LifePlayer stories while reading the same story. 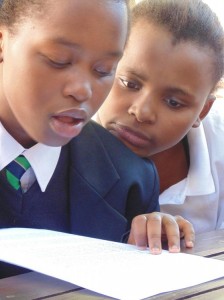 At the beginning of February we started to cooperate with the DSG Drama and English teacher, Chi Ingledew. She taught her students in drama and let them prepare nine German fairytales and African fables. She separated her 40 students into groups and we recorded their stories with a laptop during two days.

During the next weeks, we will edit and work on the recorded stories and I am looking forward to the further cooperation between the Victoria Girls’ High School, CM Vellem HPS and the Diocesan Girls private school. The outcome will be recorded on awarenet.”