“I was once cripple but now I can walk!”
6 months from now, the Joza Youth Hub Computer Lab was just
finished, made ready for use. Fourteen computers, fully functional
and in good condition, so it seemed until two computers were
dysfunctional/ broken …
These two computers just decided to go without a word or saying
‘goodbye’… A possible explanation for this is the following:
The computers were relatively old and Grahamstown
recently and regularly has load shedding occurring every now and
then. 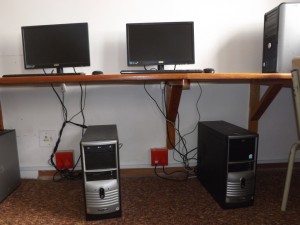 On a very unexpected pleasant day, the ‘enemy’ – load shedding
struck the entire location area leaving us in dark… After that and
after finding out that two of the Joza Youth Hub computer lab
computers were not working any longer and after sometime of trying to fix them,
but couldn’t be fixed neither by myself nor Richard Srickland,
I then branched out to Gareth Walwyn (AMP! Director) for supplies to assist
us get the computers to work again. But something better was
offered to us. Two new “legs” – computers… after
crawling for a couple of weeks…We finally leaped for Joy!

Proclaiming I was once cripple but now I can walk.
So we are now back to 14 computers again. All thanks to Di Hornby
from Rhodes University who generously organised the donation.