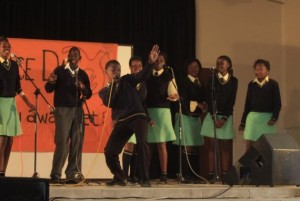 Nathaniel Nayluza in action during the peace day concert.

During the last four years we have hosted three awarenet Peace Day Concerts with five different schools participating every year. All songs were originally written and rapped in isiXhosa or English, with lots of time and effort going into composing, rhyming and practicing for the big concert. Participating schools were Mary Waters HS, Nombulelo SS, C.M Vellem HPS, Good Shepard PS, Ntaba Maria PS, Khulitso Daniel SS, Nathaniel Nayluza SS. Intense training in lyrics and vocal training was given by Sonic Art Studio. After about 10 weeks of preparation it all came together at our annual Peace Day Concert (International Peace Day: 21/9) which is usually held in the Joza location. Teams competed in rapping, singing and performing against each other for the best overall Peace Song. Overall winners so far were Mary Waters HS, Ntaba Maria PS and Victoria Girls High School respectively. 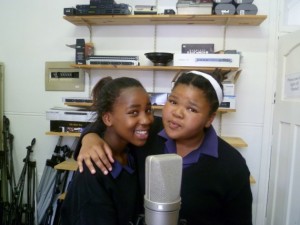 The best male and female rappers also receive a certificate and a prize for their effort. Another certificate is usually given out for best lyrics. The concerts were well attended by local people.

Subsequently, all songs were recorded professionally once by Sonic Art Studio and twice by the Rhodes University Music and Musicology Department. Two CD launch parties took place so far, the third will happen soon. The overall winners (Mary Waters HS and Ntaba Maria PS) of the best Peace Song also had the opportunity to have their own music video professionally made. Victoria Girls High School’s music video will be produced soon. Mary Waters HS’s video was taken in the areas around their school, while Ntaba Maria PS’s was taken in the Botanical Gardens and at the Settlers Monument with a beautiful view of the city. This year we will be hosting the Peace Day Concert again in September 21 and training for this big day will begin in the third term. 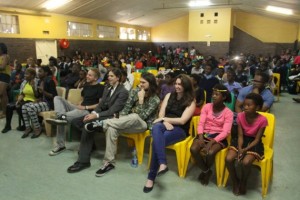