During the last term we did a video documentary project with our learners. Every Group chose a topic that is relevant to them and somehow connected to the local community. We wanted them to do as much as possible by themselves, but we also wanted to produce videos that look as professional as possible. It sure is an ambitious goal to meet both of those demands, but in trying to do so we got some very valuable help from our partner Upstart Youth Development. Together we organized two workshops introducing some of our learners to the basics of video producing. 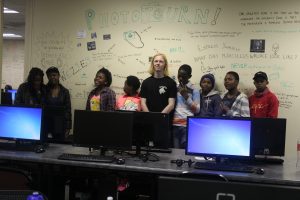 the workshop crew at the introduction tour

Even though theworkshops took place on Saturdays, we quickly found nine learners from Ntaba Maria primary school and Khutliso Daniels secondary school, who were exited to participate. They were part of different groups and also had different roles in their productions, which made the workshops very interesting, as we approached the topic from multiple perspectives. Not only the kids, but also me and Chiara learned a lot of useful skills for our project. Still, Shamiel from Upstart managed to keep it fun throughout both workshops. The working atmosphere was very good and we even got a tour around the Africa Media Matrix building, which is where the workshops took place. It is a very modern and fascinating place and the headquarters of the Journalism and Media department at Rhodes University. 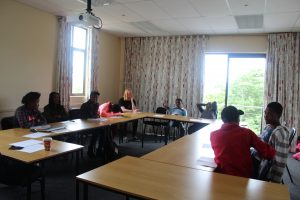 Between the two workshops, we put our new knowledge into practice and it was impressive to see how well the kids picked it up.  In the second workshop we talked about the storyboards the kids prepared and finished up the planning process so we could finally get started with the filming.

Once we have done that, we will meet up with Shamiel again to get some tips and advice for the editing. We are very much looking forward to this, as we don’t have too much experience with it after all. But we are very eager to change that and hope to be able to show you the results early next year.