Back in December Chiara wrote a blog post about our Community Engagement Project, where we produced short video documentaries about topics concerning the local community. One of those videos was created in cooperation with Inkululeko, an NGO working at Ntsika Secondary School. Instead of a documentary, we quickly decided to make something closer to an advertisement. We started to write a script with our learners and they discussed it with some of the Inkululeko learners who run the Common Ground Café. After attending the Video Workshop that Upstart held for us (I also wrote a blog post about that) they developed a storyboard together and we started shooting. 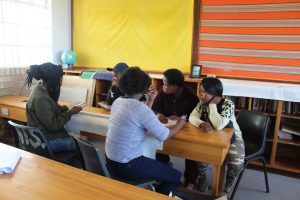 Inkululeko and awarenet students working on the script

We manged to wrap up the filming by the end of the fourth term and started editing once we were back at work in 2017. We were very happy about the results and therefore decided to put a bit of extra effort into the editing. We recorded additional voice overs to clarify the story and spend quite some time trying to optimize the sound. That really was the biggest challenge we faced due to our lack of fancy equipment. Other than that we were impressed how good the material was, that we produced with our small handycam. 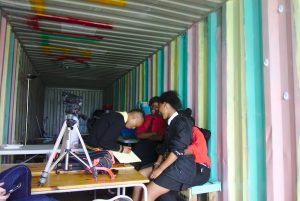 When Jason Torreano, the manager of Inkululeko, who lives in the USA, came to visit Grahamstown, we met and showed him the nearly finished video. After shooting an ending with him, explaining the mission of Inkululeko and its Common Ground Café, we finalized it and he published it on the Inkululeko facebook page.

We have since added full titles and put it up on our own youtube channel. Have a look at it!