It has been a very important year for the VSA and awarenet in which we were able to increase our community outreach and continued our good relationship with Rhodes University.

Successful projects! That is the first thing that comes into my mind when I am thinking of awarenet 2017. The last year was definitely a good one for our organization. The biggest accomplishment was probably the awarenet Open Lab. It gives Joza community members access to computers and the internet free of charge. Registered members can use the computer lab in the Joza Youth Hub to do their homework or research, communicate and learn. After they have registered they receive membership cards and whenever they want to go into the lab they have to identify as users. We invented the Open Lab in May 2017 and since then we were already counting more than 500 (February 2018) registered users from different age groups ranging from 7 to 70. Opening hours are weekdays from 3 to 5pm and Saturdays from 9am to 5 pm. Former learners and volunteers supervise the lab and take care that children do not access any websites which aren't meant for them. The Open Lab project was organised with the help of Rhodes University, especially with the help of Rod Amner, a Rhodes lecturer and VSA trustee. The lab consists of 12 computers fully equipped with mice, keyboards and headphones. During the whole time the children get supervised through awarenet staff. We are counting 8 supervisers including four former awarenet learners. The lab was open from 3 to 5pm on workdays and from 9am to 5pm on Saturdays. The first opening hour is meant for learners doing homework and school research but after that specific time everyone is welcome to use the computers for private research, gaming etc. Within the Open Lab we often create projects. A very popular project was the coding course. We invited special guests from the Center for Information and Communication Technology at the Fondazione Bruno Kessler in Italy. They taught children the basics of coding, programming and animation in a playful way using 'Blockly Games'.

Learners also loved the movie making course with Alette Schoon, a Rhodes University Journalism lecturer. She showed the learners how to draw storyboards, shoot scenes and edit the footage ultimately creating an interesting movie with their mobile phones. The result is published on YouTube.

Grocott’s offered a photography workshop for its community partners. It took place at the African Media Matrix building at Rhodes University and was held by Mia van der Merwe, who is a professional photographer and a photography teacher at the University’s School of Journalism. Last year's volunteers Chiara and Luka took part in that workshop and gained a lot of experience, which was used for their various projects.

A course for teachers was made possible by a generous donation from the HCI Foundation. The HCI Foundation is the corporate social investment arm of HCI, a black empowerment investment holding company where the majority shareholder is the South African Clothing and Textile Workers Union. We offered the first awarenet teachers’ course to a group of teachers from nearby schools Nombulelo Senior Secondary and Archie Mbolekwa Senior Primary. The course coordinator Kjetil Torp introduced our e-learning platform awarenet and further online and offline ICT resources with an educational context. We learned a lot during the pilot and will skale the project in 2018 since we are now SETA accredited.
Apart from the activities in the Open Lab, we still offered courses the traditional way to groups of learners from surrounding schools either at their own computer labs or at the JYH. During February, the songs of previous year's Peace and Music Project were recorded. We also offered a Journalism Project during the first term. Learners wrote articles for the local newspaper 'Grocotts Mail'. The lab supervisors (Andiswa Ntete, Sinesipho Goduka, Sinesipho Soxujwa) wrote an article as well. They took part in the annual Puku Story Festival 2017 and their experience was published in the local newspaper. During the course of the year, awarenet learners produced an Common Ground Café Advert for our partner Inkululeko, an NGO working at Ntsika Secondary School. Another highlight was definitely the awarenet Health and Fitness Day 2017 rounding up the annual Health and Fitness Project in the second term on Youth Day. awarenet learners from different schools competed for the honour of being the awarenet sport champions of the year. As usual the boys in the awarenet program took part in the awarenet soccer cup, new this year was that also girls teams were pitted against each other in the awarenet netball cup. The winners of the awarenet Cup were treated to an outing at the Grahamstown Arts Festival.

On the 1st of April, the second JYH Open Day took place. Community members came to the event and spend some time together to end the term in a good way. Every partner prepared an activity showcasing what the organization is offering to the youth. awarenet showcased the computer lab with a typing competition. 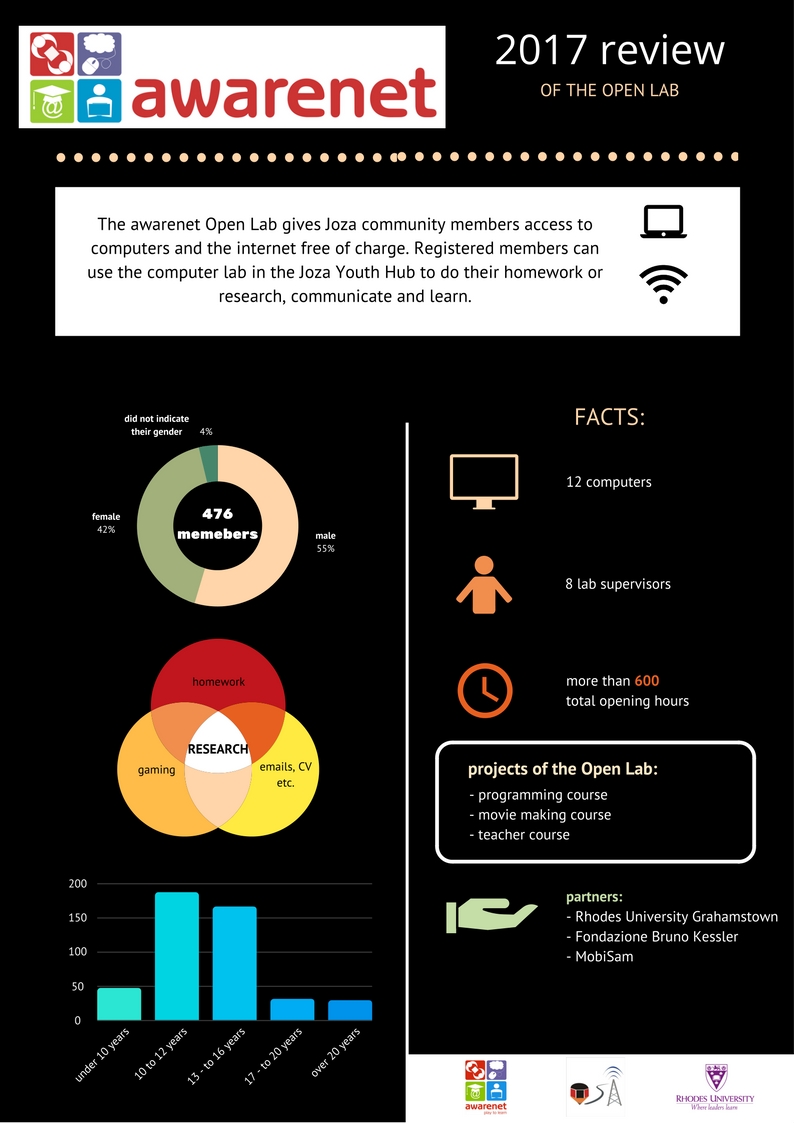 Unfortunately, the annual Peace and Music Project during the third term had to be cancelled half way through the project. Most schools did not attend well and were not able to perform their own song on stage, which is the goal of the project. In 2017, we realised that we had to change the way we offered combined IT training and project work to the learners in the community. It was no longer economical to travel to schools and group learners by school. At the same time, no other organisation in the Joza Youth Hub used the computer lab any longer for their projects, so the VSA decided to make stronger use of it and offered all their annual projects at the hub. Of course, this circumstance requires the learners to be more reliable and self-organised. Many of them failed due to different reasons, often beyond their responsibility. Instead, other interested community members approached us. This is how the idea of the Open Lab emerged, which is described above. Consequently, for 2018 it is now planned to offer clubs - instead of term aligned projects at schools - to any interested person, no matter where they come from. awarenet clubs will offer special activities after school, e.g. there will be a journalism club, in which learners will write articles for the local newspaper 'Grocotts' and a movie club, in which learners will create their own short movies.

To create more awareness of the awarenet programme in the community, we participated in several public events and gave talks. The Village Scribe Association was invited to talk about the awarenet programme at the University of the Third Age in Grahamstown on the 16th of February. In July, Kjetil held a lecture at the Education Department of Rhodes University about the awarenet platform and how it can make it easier for teachers to integrate ICT in a classroom setting. Another talk was given at the Rotary Club Grahamstown to attract further funding. During the Grahamstown Arts Festival, Kjetil joined a panel discussion „Business beyond festival“ at the Fingo Festival.

The huge outreach in 2017 was rewarded with a Community Engagement Award. Rhodes University awarded awarenet for their work with university student volunteers on the 10th of October. Community Engagement volunteers regularly take part in activities conducted by local non-profit organisations - including the VSA - among youth and other community members in the wider Grahamstown area.

The VSA's former intern Mcvay Boko was also awarded. He received one of the rare spaces at the North-South component of the weltwärts volunteer program which is designed to facilitate cultural exchanges between countries of the global north and south. After working for the VSA for two years, this was an incredible chance to climb the ladder!

Thank you to everyone who has supported and still supports the Village Scribe Association and the awarenet programme!