This Wednesday we officially opened the second awarenet computer Lab! All the people who put in effort in establishing the lab were invited to share some cake and admire the progress. This Lab will serve as a learning lab to give a core group of school learners the opportunity to follow a structured program composed of educational support, ICT training and media work.  The learners who are all in grade 9 attend activities in the Learning Lab after school several days a week, the idea is to follow the same group of learners all the way until they leave school in grade 12.

In addition to being taught by awarenet staff the learners will also be visited by students from Rhodes University specialized in their subjects who will share their knowledge in a fun and communicative way.

The origin of establishing a second computer lab was that our Open Lab in the Joza Youth Hub was highly frequented by both learners and community members. So there was the need of a second space, particularly for learners who participate in the more structured part of our program.     The journalism project Upstart! was moving to the university. So we were lucky enough to be able to make use of their vacated office.

Thanks to the support of a lot of different people awarenet was able to install a second computer workspace for our learners.

Most of the technical connections were installed by an enthusiastic team from Rhodes University Computer Society Sudo Soc led by their Community Engagement representative Richard Were. The team put down countless hours in making the lab see the light of the day.

We also would like to thank our former volunteers Max and Xenia who were responsible for the new look of the office. 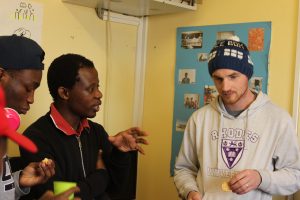 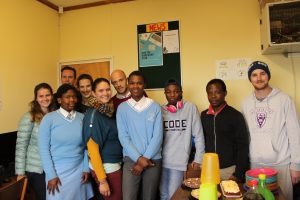