The awarenet Open Lab sees more than 300 computer sessions over a seven days period! We recently conducted a survey of the usage of our computer lab which is open to the public from Monday to Saturday and is managed by a lab supervisor. 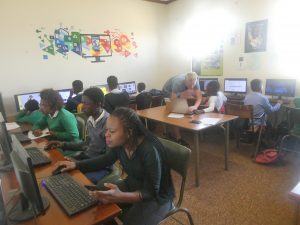 The Open Lab concept was introduced in 2017 and is currently the only site in Makana municipality where anyone from the public can access computers connected to the internet. It has been a great success as an increasing number of community members are using this free of charge service. There seems to be higher traffic during end of school terms, as school learners, who comprise the greater number of users, catch up on assignments and exam preparations.

319 users visited the Open Lab in the seven days period of weekdays from the 5th of  November to the 13th of November 2019. Of these 300 were school learners and 19 were adult community members.

School learners from grade 8 were the most frequent users of the Open Lab with 29% of all users, followed by grade 9 learners with 19%, making the average age of an awarenet Open Lab user 14,2 years. 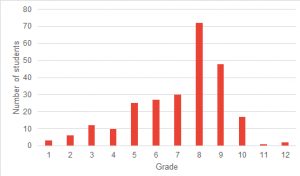 Learners from as many as 17 schools in Makhanda/Grahamstown visited the Open Lab during the seven days of the survey. 34% of the Open Lab users primarily accessed the computers for social media, while 25% used educational resources such as online learning platforms and offline learning material.  21% of the users did general internet searches and 9% accessed offline games and videos provided on the awarenet-server – these are mostly educational and are particularly popular among primary school learners. An interesting finding is the use of Google Maps among a small group of learners, we have noticed that learners are very interested in exploring spatial spaces around their home base.

These data do not only serve as evidence for the popularity of the Open Lab but also help inform our organisation when we plan for the future of the project. We will carry on with our data gathering in 2020 and hope that the  awarenet Open Lab will continue being a vibrant place buzzing with people!